EUREGEX demands to give every EU citizen a unique identity! 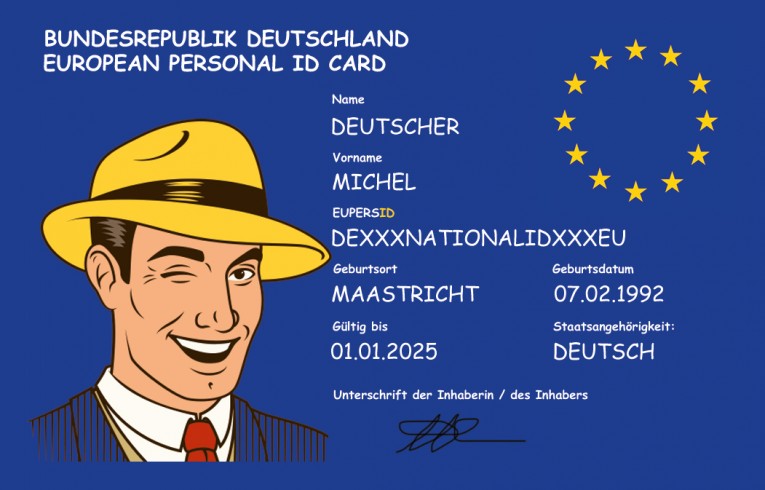 We demand to give every EU citizen an unique identity, a European personal identification, the “European Personal Identifier (EUPERSID)”.

Please discuss the advantages and disadvantages of such an “unique identifier” with us.
Subscribe our appeal and open letter to the European legislature and give us your statement.

Here is our preliminary Design:

„Dear European Parliament, honourable Commission, Europe needs to know who lives in Europe, and above all: where!

This is our understanding of the minimum standard for a modern society such as ours, whose democratic and ethical development hast to be protected.

The mobility of the people has become enormous, globalization, sophisticated technical and logistical infrastructure shrink the world and let the Europeans attend the World Affairs on a daily basis. And not only virtually but also physically: today in Berlin, tomorrow in Dublin. And in 12 months possibly in China, for 1 or 2 years, then in the United States.

A European must have a “face”, be counted, and: be reachable for the state, but also for market participants that have a legitimate interest. In the digital world a pseudonym and / or an avatar has long been taken for granted, but must it also apply to the real world? We demand a mummery prohibition! Because it is a tremendous impact in the economy if a Person can not be clearly identified. Many will now say: “there are identity cards” but is that really enough ? On closer inspection you will find that this is by no means the case: the online world barely helps the card because the authentication creates technical hurdles that can hardly be handled in practice. And most of the participation in the real economic life starts off in the digital world (for example e-commerce). But In the real world the Identification Card only works on a local level. And what do I need an ID for, when the Person it belongs to is no longer available. An ID is only as current as its date of issue and if a country such as France does not require that a certificate always has to carry the current residential address, then a copy thereof to the claimant having a legitimate interest is not of much use. An example: a Frenchman buys something on his vacation and paid by check. The accompanying card is indeed genuine but the noted address is already 10 years old and it was followed by several relocations since issue of the document. Since France operates no population register, there is no corresponding archive. The claimant then asks of the missing French at the last known home, so he will have to reckon with the following information: „This person is not known to us“.

With a population register, the information in lieu thereof could be “moved (in 2012) to community XYZ” . The larger the origin, the greater the probability of obtaining the former statement. But because there is just no population register in France, neither municipal nor central, it would make no sense to require the citizens to lead the current address in their Identity Card. What might the ID office want to support : the phone bill, or the electricity bill, confirming the residency?

The same applies to England: if a newcomer doesn’t intervene with the official authority, or somehow becomes conspicuous, the state has no knowledge of this person and consequently can not provide information to potential contract disputes between market participants, let alone enforce the law. Ireland want to Introduce a postcode system in 2015, which on one side is already criticized and on the other hand there is no obligation to implement it. Currently – and probably also for the indefinite future – a house can have a variety of completely different addresses, or an address can apply for a variety of homes. House numbers? Not everybody needs them! Which brings us to Italy: House numbers are not given away by every community anymore. The further south you go, the fewer house numbers are found. You can (but you must not) get your own house number and let it be signed. If the committee responsible postman is absent due to illness or holidays, such a delivery is often not possible because only the postman knows where an addressee lives.

Spain registers its citizens, but only assigns a tax number or one of the other 2 id´s, but the date ob birth is not registered. and an address is kept under wraps because of the Spanish data protection rules. Only courts have the right to get to this information.

Germany knows municipal population registers, so it is decentralized. At least 6,000 municipalities have sovereignty over the data. Although there is generally a good information behaviour, the register increasingly shows a “moved to Unknown”. The feedback of the new population register to the previous population register fails too often. Especially name changes and distortions abroad lead to people with unknown addresses. What a disaster: even such a well-organized and not overly large or populous country like Germany does not know the residence of many hundreds of thousands of (State) citizens.

Eastern European countries are, due to earlier – partly autocratic systems – often better informed about their citizens. Make a request for information but often faces insurmountable or unrealistic obstacles. Hungary requires the knowledge of the mother’s maiden name of the requested person, along with translated material (by a public authority) as proof of interest. But who knows the maiden name of his debtors mother? Or who wants translate to the official rules of a judgment if he does not even know if he gets a positive disclosure? Alone to know about these frustrating demands a correspondingly complex investigation is already required.

In Switzerland, data protection is in this point of view a municipal decision whether to issue a disclosure or not. Or only to certificates and powers of attorney. Thus, an administration clerk could employ half the world deal with the craving for such documents, which entitle to the address request. To then at the end, after being taught everything Demanded to say: “Such a person is not known to us ….”.

And so one fort he other EU-countries. The situation is aggravated by the mass migration to Europe those times. Hundreds of thousands, even millions come to us from regions, that might have different or even worse registrational background. They come without papers, names in foreign writings and without evidence, from addresses that are metaphers but not unique locations. Given personal data can hardly been verified. Hundreds of thousands migrants disappear without registration, and if a registration was done, it might not be compatible with the one of the neighbor state. Note even the fingerprint is always taken. Once the person moves, who will be able to match this person to a previous address and concrete act of legal significance? One must not have much fantasy to see that this might and will be an issue.

EUREGEX is the leading – and possibly even the only existing – information agency for worldwide address tracing and apart from this we are also the expert for the international debt recovery of claims against consumers or individuals. With excerpts and examinations of documents and investigations in land registries and commercial registers worldwide, we are a unique specialist for your cases with an international dimension. More Information..